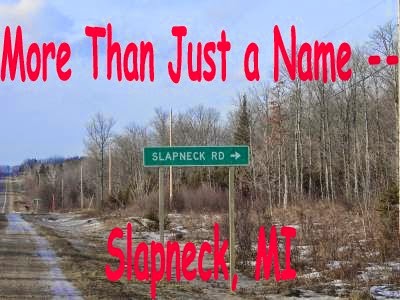 Once in awhile, I’ll receive an e-mail from someone looking for information on the community of Slapneck, just east of Chatham.  Slapneck does not get much recognition anymore as it is no longer found on road maps.  However, folks driving along M-94, roughly five miles east of Chatham, will see signs for Slapneck Creek and Slapneck Road, reminders of a small community that still exists to this day, although only as a residential area.  This website is dedicated to Slapneck and serves to explain how this community received its name.  It’s not what you may think.  (editor's note: many of the road signs pictured on this web page no longer exist. During 2012, the department of transportation replaced all of the highway signs but decided to not replace the ones with the Slapneck name in them).

Those unfamiliar with local history may see those signs on M-94 and chuckle just thinking of the origins of the river and road which bear the name.  No, Slapneck did not receive its name from people slapping their necks at pesky mosquitoes along the river and swamps in the area.  It was named after John F. Slapnick, a land looker and surveyor from Pennsylvania.  It is unknown why the community was named after him, whether he named it or was named by people he knew in the area.  Whatever the case, his name was misconstrued to be Slapneck, and thus, what the area soon became known as.

The name “Slapneck” was temporarily changed for a little while.  Around 1915, Leo Geismar, the first superintendent of the State Farm in Chatham, proposed the name to be changed to Calciferous, for the geography of the area.  Not only was the new name boring, but it was also hard to pronounce for the French, Finnish, and Swedish immigrants that lived in the area. Calciferous didn't last long as residents soon began using the more familiar Slapneck name.  After a community vote at the Chatham Railroad Depot, the name was officially changed back. 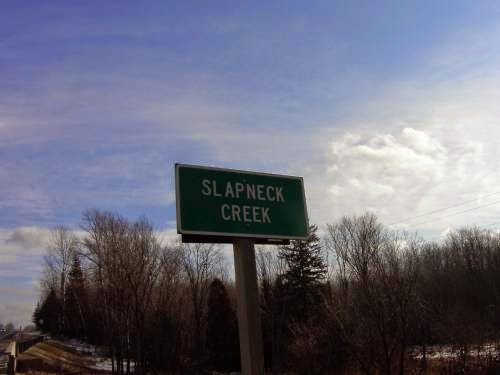 The name became so popular and famous that newspapers, both locally and even statewide (the Detroit Free Press) began writing articles on the origin of the name.  And although there wasn't a lot in Slapneck despite the large farms, it did have a school, a railroad depot, and the railroad passed through the community up until 1937.  In fact for awhile, the railroad was the major means of transportation.  A trip to Chatham on the railroad during the early 1900’s for an adult cost 12 cents, and six cents for students.John Slapnick had also created the AuTrain Rod and Gun Club which was situated one mile south of Dixon on the Slapneck Creek.  It was located along the shore and was used by the club on their fishing trips.  That building was destroyed by fire in 1926, but the Forest Lake state campground still exists on the site where the former Rod and Gun Club building used to stand.  It was one memory of John Slapnick’s presence in the community. 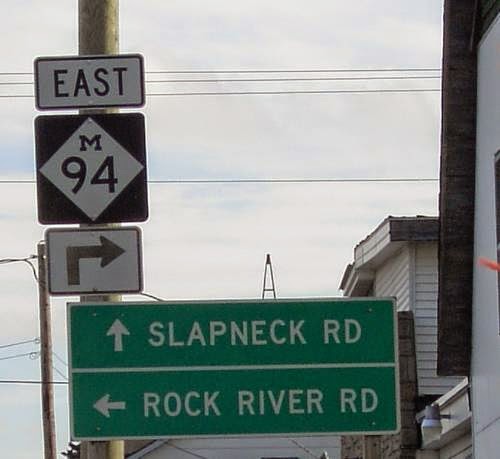 The school that served the Slapneck community was a one room school house situated along the banks of the Slapneck Creek.  It was built in 1907 and held first through eighth grade students.  Usually, about 25 students in all were taught at the Slapneck school.  But when enrollment increased as more people moved to the Slapneck valley, the school could not handle the increase.  That meant students in seventh and eighth grades were sent to the Chatham and Finn Spur schools.  The highest enrollment ever achieved at the Slapneck school was 40 students in 1926.  Often the teacher had additional duties besides teaching the Slapneck students.  That meant keeping the fire lit and the school house warm during the winter months.  And neither snow, wind, rain, or power failure cancelled classes, since the only way to reach the school was by walking.
In 1933, Rock River Township consolidated many of the schools.  Only Eben and Chatham had schools, which meant the Slapneck school was no longer needed.  The building was sold many times and different owners had the building.  Finally, in 1968, the old school was dismantled. 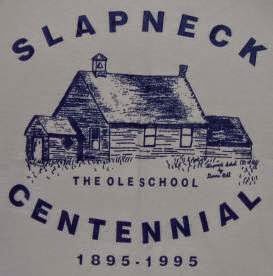 On August 5, 1995, residents from the past and present came together to celebrate the centennial of the Slapneck community.  The celebration was held on Elmer Wanska’s farm, hosting the event for some 500 people.  It took place immediately after the Chatham Homecoming parade had ended in Chatham.  In fact, some 12 parade floats commemorating the Slapneck centennial were entered into the parade.  Lots of memories, laughs, and discussion about the old days took place amongst a sea of white “Slapneck Centennial” t-shirt wearers.  U.P. historian Fred Rydholm discussed the history of the Slapneck community, and good food was on hand to please the crowd.  Even a few classic cars were on hand to remember the old days in Slapneck.  And of course, the replica of the old railroad water tower stood tall and proud as a beacon of Slapneck's past. 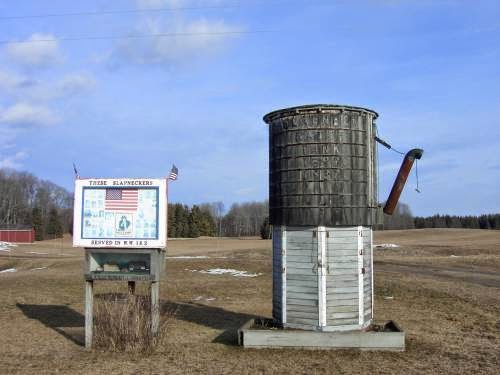 Not much remains of the Slapneck era from the days gone by.  In 1988, Donald Hakanen constructed a replica water tower used by the railroad on the site where the original tower stood during the railroad’s heyday through Slapneck.  Inside the tower, photos and articles are included for people to reminisce about the history of Slapneck.  Also on site is a veteran’s memorial to the residents of Slapneck that served in World War’s I & II.  Elmer Wanska, local historian, passed away several years ago, losing an important link to those old days.  Many new people have taken up residence in the Slapneck community, continuing the small community feeling of the settlers from years ago.  Many of the farming fields are becoming overgrown with trees and brush, signaling the end of the local farms owned by families.  Getting in and out of the Slapneck area is relatively easy with gravel side roads maintained by the county road commission.  The old railroad grade still exists and is used year-round by recreation vehicles.  Although there may be aesthetic changes and new faces in Slapneck, the memories and the small town feel continue to exist in present-day Slapneck.